Sorry! You missed The Actor's Nightmare at Park Theatre 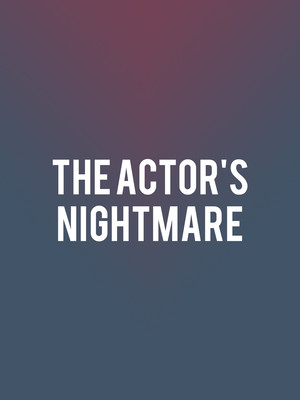 An absurdist take on show business and all of its gloriously outrageous trappings!

Why See The Actor's Nightmare?

Having won a Tony Award for his transcendent comedy Vanya and Sonia and Masha and Spike in 2013, iconic American playwright Christopher Durang knows a thing or two about traversing the highs and lows of the entertainment industry. The absurdist icon celebrates the outrageousness and OTT-ness of showbiz, as well as what it means to be an artist, in The Actor's Nightmare, now showing at London's Park Theatre as part of the company's brand new theatre season.

Filled with the playwright's trademark eccentricity, The Actor's Nightmare was inspired by the common dreams actors and performers have about going onstage and not being able to remember their lines or moves or melodies. Its story follows a man who suddenly finds himself backstage and after being confronted by stage manager, the man must understudy the role of a lead actor who's broken both his legs. Despite not being able to remember his own name or what play he's even performing in, the man finds himself on stage and has to improvise his lines as the scenes around him shift from excerpts of Private Lives, Hamlet, Checkmate and A Man For All Seasons.

Seen The Actor's Nightmare? Loved it? Hated it?

Sound good to you? Share this page on social media and let your friends know about The Actor's Nightmare at Park Theatre.