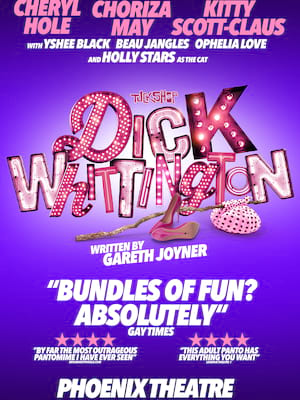 Dick Whittington will leave you gagging!

It's going to be puns galore this Christmas! Ameena Hamid Productions and TuckShop return to the West End with a hilarious drag pantomime staging of Dick Whittington. This classic tale will be re-imagined in a way like no other, and with an entertainment company like TuckShop (who are at the forefront of UK Drag) you can only expect the best! With season one's Drag Race UK Cheryl Hole and seasons three's Kitty Scott Claus and Choriza May taking centre stage, it's going to be one Dick (Whittington) you don't want to miss.

The Story of Dick

An old English folklore tale from the middle ages, we follow the story of Dick Whittington (Cheryl Hole), a young man who was orphaned at an early age. Living in a quiet village, he plans to head to a place called London, as he has heard people describe it as being "paved with gold". Hoping to mine as much gold as possible from these streets, he heads off to the city with his beloved feisty pussy cat (Holly Stars) - only to find that reality is very different.

With the villainous rodent Queen Rat (Choriza May) standing in his way of happiness, the Spirit of Soho (Kitty Scott Claus) steps in to help Dick save the city and win the hand of his beloved Alice - but will it be easier said than done?

Sound good to you? Share this page on social media and let your friends know about Dick Whittington at Phoenix Theatre.