Sorry! You missed Death Of A Salesman at Piccadilly Theatre 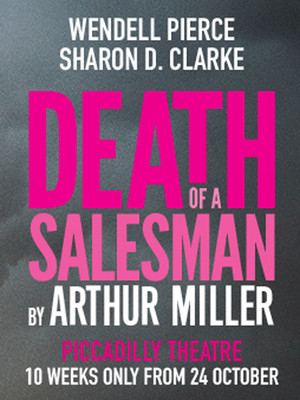 Why See Death Of A Salesman?

After a sell-out run and a five-star critical reception at the Young Vic, the Marianne Elliot and Miranda Cromwell helmed production of Arthur Miller's Death of a Salesman makes a hotly anticipated West End transfer this October! Original stars of the Young Vic production, Wendell Pierce and Olivier Award winner Sharon D. Clarke, will reprise their triumphant roles when The Death of the Salesman lands at the Picadilly Theatre.

A play that explores the binding grip of the 'American Dream', Death Of a Salesman won the Pulitzer Prize and the Tony for Best Play in 1949 and solidified Arthur Miller as one of the greatest playwrights of the 20th century.

Star of Suits, The Wire, and Selma, Wendell Pierce makes his West End debut as Willy Loman with Oliver award-winner Sharon D. Clarke starring as Linda Loman. With the award-winning prowess of Marianne Elliott (Company, The Curious Incident Of The Dog In The Night-Time, Angels In America) and the talented Miranda Cromwell at the helm of this latest rendition, Death Of A Salesmen is transported to new and breath-taking heights.

WHAT IS DEATH OF A SALESMAN ABOUT?

On his return from a business trip, Willy Loman becomes enraged to see his two sons Biff and Happy staying at the family home. In a series of flashbacks, we learn more about the Loman's and their intricate and sometimes secretive family life. From affairs to jealousy we chart the highs and lows of one family on the edge of destruction and their quest for fulfillment.

Please note that the images used are from the original Young Vic production and may not reflect the current cast.

Death of a Salesman is ready to shake London to its core.

A playwright always ahead of his time, Arthur Miller's Death of a Salesman (originally performed in 1949) explores the detriment of the American Dream, depression and the effects of toxic masculinity.

Seen Death Of A Salesman? Loved it? Hated it?

Sound good to you? Share this page on social media and let your friends know about Death Of A Salesman at Piccadilly Theatre.