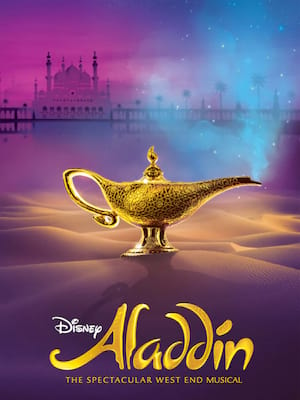 Impressive stage magic, a gold-dripping design and a party-loving genie make this energetic adaptation of the animated movie a wicked treat

Disney bring their 1992 movie classic to life in this fantastical musical, which features the same unforgettable music as the film - created by Academy and Tony award-winning composer Alan Menken and lyricists Howard Ashman, Tim Rice and Chad Beguelin - as well as some brand new numbers.

Directed and choreographed from Tony-winner Casey Nicholaw, Aladdin is a vibrant and fabulous stage spectacular for all ages, raising the beloved story to glittering new heights with stunning sets, costumes, and special effects adding a whole new dimension!

WHAT IS ALADDIN ABOUT?

Aladdin is a charming street urchin in Agrabah, who, when 'exploring' the mysterious Cave of Wonders, uncovers an ancient lamp that proves to be more than just an interesting lighting solution. He unwittingly frees the lamp's resident wacky Genie, who grants him three wishes. Transformed from pauper to Prince, Aladdin catches the eye of beautiful but bored Princess Jasmine, who longs for some adventure of her own!

But it's not all a smooth magic carpet ride, because Aladdin isn't the only one that knows of the lamp's power. Enter the nefarious Jafar and his minions, who have plans for three wishes of their own and it's up to Aladdin to defeat him to keep the Kingdom from his clutches.

Aladdin is suitable for a general audience, however, Disney recommends Aladdin for ages six years old and up. Please note that children under the age of three will not be admitted into the theatre. All persons aged 16 or under must be accompanied and sat next to the accompanying adult. They may not sit on their own within the auditorium. If children do have separate seats you could be refused entry. All persons entering the theatre, regardless of age, must have a ticket.

It is a winner whether if you are a newcomer to the film, or a die-hard fan

As the resident Disney superfan at London Theatreland, to say I was ridiculously excited about this new addition to the House Of Mouse's West End collection is a little of an understatement.

Unlike its predecessors, Beauty and the Beast and The Lion King, this Disney... more

Sound good to you? Share this page on social media and let your friends know about Aladdin at Prince Edward Theatre.