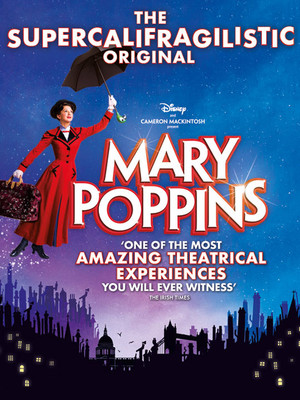 a guaranteed jolly holiday with Mary

The family favourite is back with Zizi Strallen, Charlie Stemp and Petula Clark

Everyone's beloved nanny returns for another magical run in the West End! Join Mary Poppins, Bert, Jane, and Michael as the wonderful story of Mary Poppins comes to life on stage! Based on P.L. Travers cherished stories and the classic 1964 Walt Disney film the stage musical is full of our favourite songs including, 'Jolly Holiday', 'Step In Time' and 'Supercalifragilisticexpialidocious', as well as featuring brand new songs that will keep you toe-tapping and singing along all the way home.

Disney's production can boast of an incredible creative team with Richard Eyre and Matthew Bourne leading the musical as co-directors, and with Stephen Mear co-choreographing the musical alongside Matthew Bourne. Zizi Strallen (now nominated for Best Actress in a Musical Olivier) reprises her role as matriarchal Mary with theatre's Golden Boy Charlie Stemp (2020's Olivier Award nominee for Best Actor in a Musical) as the loveable Bert.

What is Mary Poppins about?

Jane and Michael Banks have chased away all their previous nannies, much to the despair of their parents, George and Winifred. When the children's letter explaining what they want in a nanny is ripped up and thrown on the fire by their father, their hopes of finding a kind nanny is lost. That is however until the wind changes and the mysterious Mary Poppins turns up at the door along with adventure and magic. To George's exasperation, Mary Poppins becomes a beloved member of the family, teaching the Bank's a lot more than they think...

Mary Poppins first appeared on the London stage back in the early naughties where it ran for three years before it headed over to Broadway where it won a Tony Award for best musical and ran for almost six years!

As an advisory to adults who might bring young people, children under the age of 3 will not be admitted into the theatre. All persons under the age of 16 must be accompanied by and sat next to the accompanying adult. They may not sit on their own within the auditorium. If children do have separate seats you could be refused entry. All persons entering the theatre, regardless of age, must have a ticket.

Disney and Cameron Mackintosh have brought magic back to the West End in this brand new production of Mary Poppins.

Went to watch this on Friday with My wife come down from St.helens and... more

Absolutely loved this show. Am a great fan anyway, but the cast were amazing.... more

Sound good to you? Share this page on social media and let your friends know about Mary Poppins at Prince Edward Theatre.