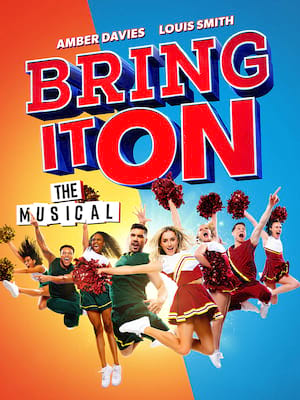 Even those with dark memories of the plastic perfections of cheerleaders may find it impossible to resist an encouraging cry of "Go team!"

Why See Bring It On?

BRR IT'S COLD IN HERE

Yes, that's right the Tony-nominated musical adaptation of the hit teen-movie of the same name is heading to the UK stage! With music by Lin-Manuel Miranda (he was brilliant even before Hamilton) and Tom Kitt (of Next To Normal fame) Bring It On follows the competitive world of high-school cheerleading.

Mixing Miranda's hip-hop-infused score, the comedic genius of Jeff Whitty (Avenue Q) and choreography that incorporates flips, tumbles, and Liberty Stunts Bring It On is the feel-good hit of the last decade! This brand new UK tour will star Olympic gymnast Louis Smith and Love Island winner Amber Davies as Cameron and Campbell. Both Smith and Davies have proved their stage chops, taking on starring roles in Rip It Up (Garrick Theatre) and 9 to 5: The Musical (Savoy Theatre, and UK tour) respectively! So grab your pom-poms, put your hair in a high pony, and don't miss Bring It On!

What is Bring It On about?

Campbell's high-school dream has been realised, she's the captain of her school's cheerleading squad! However, as soon as her title is given... it's ripped away as she is forced to transfer to the hard-up Jackson High on the other side of town. Just as Campbell begins to feel like her life is over an unlikely friendship flips her world upside down, changing her high school life forever!

Seen Bring It On? Loved it? Hated it?

Sound good to you? Share this page on social media and let your friends know about Bring It On at Queen Elizabeth Hall.