Queens Theatre has been renamed the Sondheim Theatre 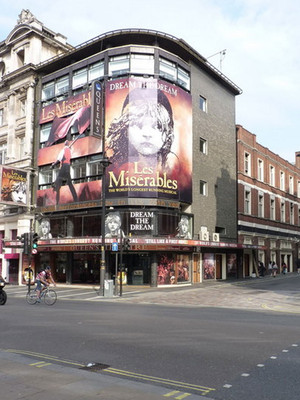 The Queens Theatre will be closed from July 2019 for major renovations. Catch Les Miserables from December 2019 at the Gielgud Theatre.


The home of musical theatre giant Les Miserables, The Queens Theatre has been serving Shaftesbury Avenue alongside its twin (The Gielgud, nee The Hicks) since 1907. Named for Queen Alexandra, this Edwardian theatre has had a bumpy ride throughout its history, becoming the first West End casualty of WWII in September 1940 when a Luftwaffe bomb rudely ended a run of Daphne Du Maurier's Rebecca.

After nearly 20 years of restoration, it reopened in July 1957 with John Gielgud in Ages of Man - a recital of Shakespeare's sonnets. In addition to hosting the longest running musical of all time (over 30 years and counting,) since its 2004 move from the Palace theatre, other notable performances at the Queens have included Noel Coward's final West End appearance in 1966's A Suite in Three Keys, and Sir Kenneth Branagh's launch to fame in 1987's Another Country with Rupert Everett (succeeded in the show by Daniel Day-Lewis and Colin Firth!)

Whilst reported in The Stage newspaper in 1907 as having some 1200 seats making roughly three hundred pounds a night, the auditorium now seats a more comfortable 1,074 and makes substantially more!