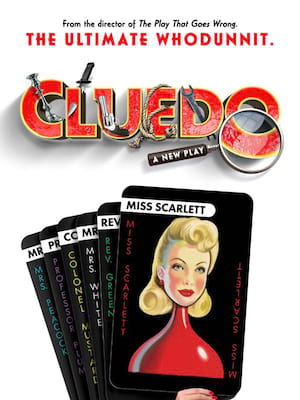 This hilarious spoof of a thriller, will keep you guessing right up to the finale as both the audience and actors onstage try to work out whodunnit ... with what ... and where!!

Was it Colonel Mustard in the library with the revolver, or Miss Scarlett in the dining room with the candlestick? Either way, people are getting murdered and it's up to a group of well-heeled colourful party guests to find out! From Mark Bell, the director of The Play That Goes Wrong and A Comedy About A Bank Robbery comes the sensational UK premiere of Cluedo. Based both on the classic board game and the cult 1985 film adaptation, prepare for an evening of mirthful mystery for all ages as you work alongside the actors to find the murderer!

Coincidentally each named after a colour, a group of guests have amassed for a party at Boddy Manor, invited by the mysterious Lord Bobby. Whilst the reason for their invitations may be obscured, one thing's for certain: they all have something to hide. And when the murders begin, it's a race against time to solve the case - and save their lives!

Seen Cluedo? Loved it? Hated it?

Sound good to you? Share this page on social media and let your friends know about Cluedo at Richmond Theatre.