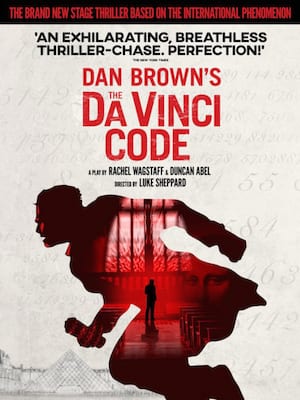 I am thrilled that The Da Vinci Code is being adapted for the stage, and excited to see the unique potential of live theatre enhance this story

Why See The Da Vinci Code?

Get ready to crack the code as Dan Brown's 100 million-selling blockbuster novel comes to the stage in this World Premiere production starring Nigel Harmon, Hannah Rose Caton, and Danny John-Jules! An epic thriller that begins in the deep labyrinth of the Lourve, and erupts through the streets of Paris and London, join Professor Robert Langdon and cryptologist Sophie Neveu as they race to solve a centuries-old mystery before the forces of darkness extinguish the secret forever.

With Brown's blessing, the production will adhere to the breathtaking pace of the book, with added aspects for a theatrical audience. Expect a suspenseful ride full of twists and turns that is sure to keep you on your toes right to the very end!

Published in 2003 The Da Vinci Code, the second in Dan Brown's books featuring Professor Robert Langdon, was a literary and cultural phenomenon. A heady thriller of murder, conspiracy, history, and religion, it kept readers rapt with short pacy chapters and tightly plotted intrigue. A movie adaptation with Tom Hanks and Audrey Tatou soon followed, further cementing its place in history. Now it makes its way to the stage, it's time for Da Vinci Code fever to overtake us once more!

Seen The Da Vinci Code? Loved it? Hated it?

Sound good to you? Share this page on social media and let your friends know about The Da Vinci Code at Richmond Theatre.