Sorry! You missed The Entertainer at Richmond Theatre 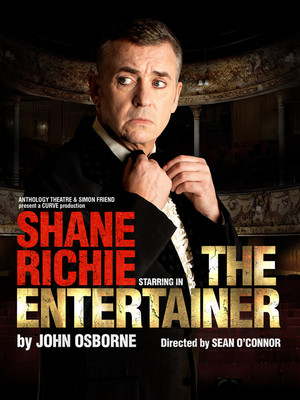 Why See The Entertainer?

Shane Ritchie is The Entertainer

Shane Ritchie steps into one of the 20th century's greatest roles as he stars in this brand new UK tour of John Osborne's classic work - made famous by none other than Sir Lawerence Olivier. Updated to the deep dark 1980s, Ritchie plays end of the pier comic Archie Rice, a man whose own decline mirrors that of the world around him. When a family tragedy occurs, Rice is forced to navigate the choppy waters of national pride in the face of personal cost.

Also starring Diana Vickers and Sara Crowe, this domestic drama is directed by Sean O'Connor. Usually set in the late 1950s, O'Connor's new setting will draw on events of the decade of excess to freshen up Osborne's play for new audiences.

A devastating and disarming portrait of an angry middle-aged man (a progression from the angry young man trope) we follow vaudeville hoofer Archie Rice who sees his once illustrious career reduced to playing in a seedy nude revue at the seaside in a ramshackle old music hall. At home, Archie's life is less than rosy; his son has left to liberate the Falklands, a move (and a war) his daughter Jean has long campaigned against. With so much opposition in the family home, is it any wonder why Archie's anger spills out in jingoistic songs, racist jokes and bitterness towards foreigners?

Confronted with the truth that he must leave his old fashioned beliefs behind, or avoid being consumed by them, Osbourne explores the decline of the British Empire and the struggles in the abroad - an eerie echo of what is happening today.

Seen The Entertainer? Loved it? Hated it?

Sound good to you? Share this page on social media and let your friends know about The Entertainer at Richmond Theatre.