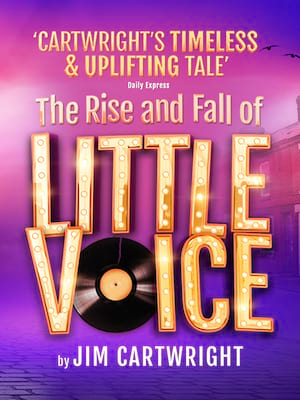 The Rise and Fall of Little Voice

One of Britain's greatest modern plays,

Why See The Rise and Fall of Little Voice?

Jim Cartwright's Northern fairytale is back in this brand new production directed by Bronagh Lagan and starring Drama Desk nominee Christine Bianco as the titular LV! A modern classic, The Rise and Fall of Little Voice is the story of Laura Hoff (LV), a young girl with incredible talent - the ability to mimic some of music's biggest divas. Monroe, Piaf, Dietrich, Springfield, and more, LV can do them all. Cowed and pushed around by a larger-than-life mother and a wannabe club impresario, she comes to learn it's not what your voice can do - it's what you do with it that counts.

A witty yet touching fable about finding your voice and sticking up for yourself The Rise and Fall of Little Voice was first seen in 1992, with the famous film adaptation following in 1998. Don't miss this exciting new production, also starring Shobna Gulati as Mari Hoff and Ian Kelsey as Ray Say.

Seen The Rise and Fall of Little Voice? Loved it? Hated it?

Sound good to you? Share this page on social media and let your friends know about The Rise and Fall of Little Voice at Richmond Theatre.