Sorry! You missed What's In A Name? at Richmond Theatre 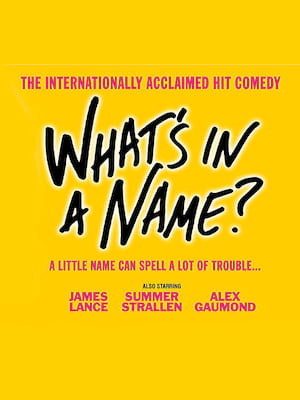 What's In A Name?

Does what we're called really have an impact on us? That's the question at the centre of this hilarious comedy from Jeremy Sams, adapted from the hit French play 'Le Prenom'.

Following runaway success in over thirty countries, it now heads out on its first UK tour starring Summer Strallen and Joe Thomas as expecting couple Vincent and Elizabeth, who've settled on a rather unique name for their unborn child. When the rest of the family gets wind of the intended moniker, all hell breaks loose, turning a relaxed family dinner into a hysterical argument that veers from childhood resentment to unspoken feelings. Side-splittingly funny, quick and clever, discover for yourself just what is in a name when it heads to town this winter.

Images are taken from rehearsals for What's In A Name?

Sound good to you? Share this page on social media and let your friends know about What's In A Name? at Richmond Theatre.