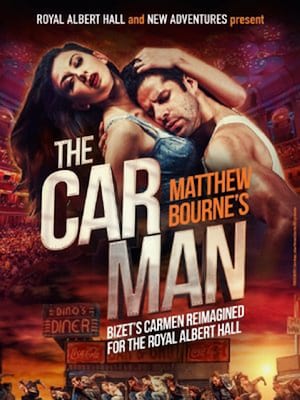 The Car Man may have found its perfect setting in the epic and spectacular surroundings of Britain's favourite venue, the Royal Albert Hall

Why See The Car Man?

Marking its 150th Anniversary in 2021, The Royal Albert Hall will host a revival of Matthew Bourne's adaptation of Bizet's sizzling masterpiece Carmen, renamed The Car Man. Aptly so, as Bourne transplants the action from 19th Century Spain to a 1950's American Garage Diner. First seen in 2000 The Car Man is one of Bourne and New Adventure's most popular works, delivering a dramatic and sumptuous retelling of the story of the infamous femme fatale, with dazzling choreography and a blazing score.

The Story of Carmen

Carmen is a fiery, provocative woman at odds with the conventions of her time. Able to seduce men with her dulcet tones and feminine wiles, Carmen ensnares the heart of Don Jose, who drops everything, including his betrothed Micaela, to be with her. When Carmen tires of her latest conquest, she leaves him for the handsome Escamillo, setting off harrowing and ultimately fatal events fuelled by jealousy, obsession, and murderous rage.

Sound good to you? Share this page on social media and let your friends know about The Car Man at Royal Albert Hall.