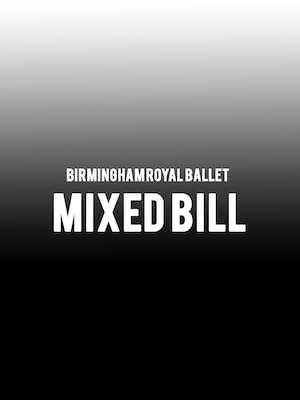 I want a company that is strong, that is not predictable, that is energetic, that takes risks, but stays true to tradition at the highest level. I'm up for big crazy ideas. I'm never going to say no to anything that's new and bold.

Cuban balletmaster Carlos Acosta kicks off his tenure as Director of Birmingham Royal Ballet with his first-ever Mixed Bill program, featuring a boundary-pushing trio of works old and new. Things set off to a thrilling start when Acosta himself joins the legendary Italian prima ballerina Alessandra Ferri on stage during the UK premiere of Chacona, a brand new duet tailormade for the company by Spanish choreographer Goyo Montero as part of his latest ballet.

This is followed by the world premiere of Imminent, Dutch National ballerina turned choreographer Daniela Cardim's latest work set to music by Emmy Award-winner Paul Englishby (Page Eight). The program comes to an electrifying close with Balanchine's virtuosic Theme and Variations. Danced to the sounds of Tchaikovsky, it's one of the most complex and technically-demanding ballets today.

Sound good to you? Share this page on social media and let your friends know about Birmingham Royal Ballet - Mixed Bill at Sadlers Wells Theatre.