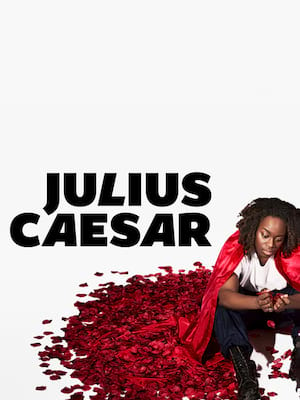 Th' abuse of greatness is when it disjoins Remorse from power.

Lend me your ears

A leader out of touch with his own advisors, a troubled public, and a fight for domination - sound familiar? While the story may be ancient, its themes continue to (depressingly) resonate through the ages, Julius Ceasar returns to the Globe this summer in this searing new production from Diane Page.

One of Shakespeare's most celebrated tragedies, Julius Caesar details the assassination of the Roman statesman in 44 BC and the bloody Battle of Philippi which followed. Believed to have been written around 1599, it's thought that the play may have been Shakespeare's response to the anxiety surrounding the health Queen Elizabeth, and the turmoil the country could be thrown into following her death.

Conquering hero Julius Caesar returns to Rome, but little does he know that there is a conspiracy afoot among his dearest and most trusted allies. Leading it is Senator Cassius who is convinced that Caesar wishes to transform Rome from a republic into a dictatorship, and crown himself as King. Along with a handful of other statesmen and military leaders, Cassius instigates a plot to assassinate him. Caesar's friend Marcus Brutus is initially unwilling to be a party to the killing, but Cassius, at last, convinces him through trickery.

The day of the murder comes, and conspirators surround Caesar on the steps of the senate and stab him to death, one by one. The last to wield his knife is Marcus Brutus, and as he strikes the final blow, Caesar, aghast at the betrayal of his dearest friend, utters his famous line: "Et Tu Brutus?"

After this gruesome scene, the conspirators are driven from the city, but immediately begin raising armies to retake Rome. To do this, they must do battle against the forces of Mark Antony and Caesar's adopted son, Octavius, who has arrived seeking revenge.

Sound good to you? Share this page on social media and let your friends know about Julius Caesar at Shakespeares Globe Theatre.