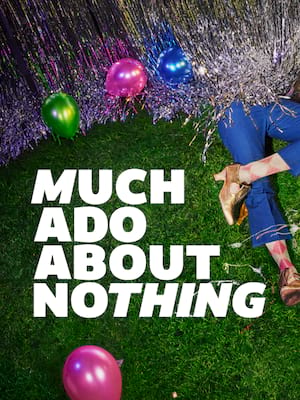 All logos, graphics and images are property of the production

Much Ado About Nothing

I had rather hear my dog bark at a crow, than a man swear he loves me.

Why See Much Ado About Nothing?

One of Shakespeare's most beloved comedies, Much Ado About Nothing pits the sexes against each other with riotous results. Two couples dance around declaring their love for each other; Benedick and Beatrice, and Hero and Claudio. But when the machinations of a dastardly nobleman threaten their happiness, one of our heroes must fake their own death in order to get a truly happy ending. Lucy Bailey returns to the venue following her five-star smash-hit version of Titus Andronicus back in 2014.

Claudio loves Hero and she loves him back; in fact, there appears that nothing will ever keep these two lovers apart. In the meantime Claudio's friend Benedick has fallen in love with Beatrice, and vice versa, but because these two play mind games with each other, it appears that getting them together is an insurmountable task. But when a vengeful nobleman enters the fray, his schemes and intrigues force Benedick into admitting his love for Beatrice, as well as having to kill his best friend. Only the intrigues of a resentful prince force Benedick to prove his love for Beatrice by vowing to kill his best friend. But will he be able to carry out this man's nefarious plan? Or will friendship and honesty prevail?

Seen Much Ado About Nothing? Loved it? Hated it?

Sound good to you? Share this page on social media and let your friends know about Much Ado About Nothing at Shakespeares Globe Theatre.