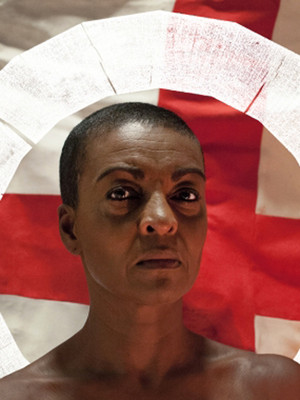 The Hollow Crown Is Placed upOn The Head Of A Woman

'On The Shoulders Of Ghosts', the second festival of the Globe's 2018/19 season explores the often imperceptible line between politics and the personal. A whirlwind of power, plotting and historical intrigue, their latest production of Shakespeare's Richard II artfully reflects this theme, chronicling the fall of 14th century English King Richard II with a groundbreaking twist. British stage and screen veteran Adjoa Andoh stars in the titular role as well as co-directs with playwright Lynette Linton, presiding over a the first ever company of women of colour to perform a Shakespearean play.

Fusing the original work's topics of power, identity, gender and pride with an exploration of what it means to be British in a turbulent era defined by flashpoints like the Windrush anniversary and scandal, as well as Brexit, the bold new production follows a man ordained by god to rule but who is himself ruled by vanity and folly. His court divided by the exile of noblemen Thomas Mowbray and Henry Bollingbroke, Richard faces mounting tensions on home soil as well as abroad, yet does not possess the strength of character to overcome them. Instead his indecisiveness, abruptness and arbitrariness spells his doom, on which he reflects poetically as his status and power wane.

Sound good to you? Share this page on social media and let your friends know about Richard II at Shakespeares Globe Theatre.