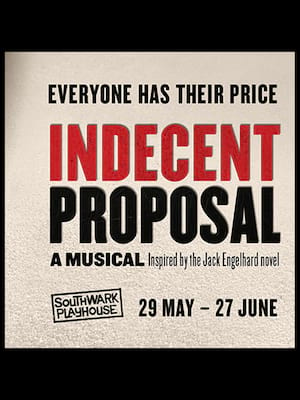 "Everyone has their price, Jonny. I think a million dollars is yours"

Don't miss the world premiere of the chamber musical inspired by Jack Engelhard's controversial novel and subsequent star-studded film. Playing at London's Southwark Playhouse for a strictly limited four-week run, Indecent Proposal takes place in Atlantic City but reimagines the work through the lens of the current socio-political climate with stunning results. It features a book by Michael Conley, music by Dylan Schlosberg and direction from Charlotte Westenra (The Return of the Soldier).

Taking place in "America's Playground" in the late 80s, Indecent Proposal follows young dreamers Jonny and Rebecca, just as much in love as they are in debt. Desperately trying to make ends meet, Rebecca works part-time at a casino and a charity, whilst Jonny is a singer-songwriter moonlighting in a backing band. When a wealthy stranger offers Rebecca a million dollars to spend the night with him, the lure of money collides with the couple's fidelity, threatening their marriage in the process.

Sound good to you? Share this page on social media and let your friends know about Indecent Proposal at Southwark Playhouse.