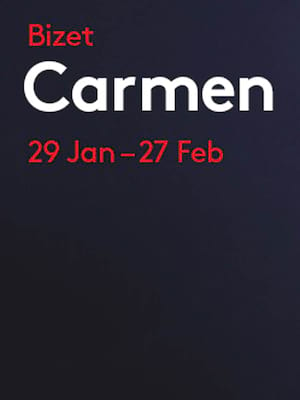 Bizet's masterpiece sees an updating to the last days of General Franco's dictatorship as Calixto Bieito's acclaimed production of this must-see opera returns to the London Palladium after enjoying rave reviews during its last run in 2015! Lead by special guest conductor Valentina Peleggi, the eponymous anti-heroine is once again sung by mezzo-soprano Justina Gringyte alongside the internationally acclaimed American tenor Sean Panikkar as her lover Jose.

A passionate tale of lust, seduction and betrayal, the setting opens on a sweaty male barracks in the dying days of Franco's Spain. Carmen is no longer the exotic beauty who exudes sexuality - she is a common tart who takes her men where she sees fit. Don Jose is no longer the weedy, manipulated weakling of old; he is masculine, dangerous and volatile. This stripped-down, modern re-staging shines a new light on the comic tragedy, with stereotypes turned on their heads and new insights into the characters' desires, dreams and obsessions.

Two hours and 45 minutes, including one interval

Please note: the above images are from a past run of Carmen and do not necessarily reflect current casting.

Liz Baldwin: “The worst Carmen I have ever seen.”

My husband bought me tickets to this for Christmas as he knows it is my... more

Sound good to you? Share this page on social media and let your friends know about Carmen at London Coliseum.