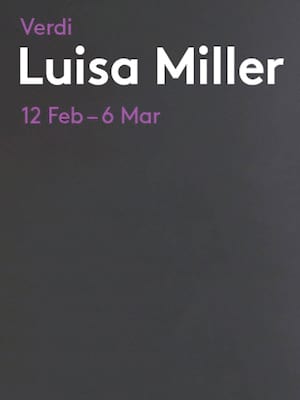 Tragedy ensues and the care with which Verdi has crafted the final duets - for father/daughter and the two lovers - never fail to touch the heart.

A Brand New Production Of The Verdi Classic

Helmed by International Opera Award-winning director Barbora Harakova Joly, the ENO presents a brand new production of Giuseppe Verdi's Luisa Miller makes its way to the London Palladium's hallowed stage. Marking a huge change in direction for the composer, the opera was written in 1849 and was one of the first operas of its time to explore the lives of ordinary people - but that doesn't make its music any less dramatic and passionate - in fact, it reflects some of Verdi's most emotionally pitch perfect music and soul-stirring melodies.

Conducted by British maestro Alexander Joel and starring ENO Harewood Artist Elizabeth Llewellyn in the titular role, Luisa Miller is set in the Alps in the 17th century. Luisa is the daughter of Miller, a retired soldier, and the lover of Carlo. Carlo is not Miller's first choice for a suitor, but upholds that his daughter may marry any man he chooses, much to the chagrin of the nobleman Wurm, who desires Luisa for his own. Making his move, Wurm reveals Carlo's true identity as the son of Count Walter, throwing all into chaos and tragedy.

Sound good to you? Share this page on social media and let your friends know about Luisa Miller at London Coliseum.