Sorry! You missed The Magic Flute at London Coliseum 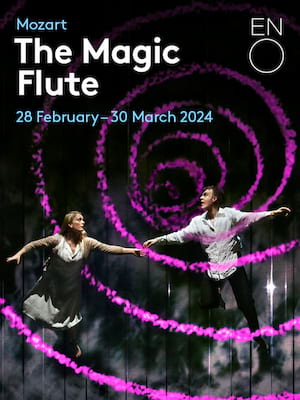 Why See The Magic Flute?

A quest for love, light and wisdom...

A young Prince finds himself lost in a distant land, his life in mortal danger he is forced to do the bidding of his mysterious rescuer in Simon McBurney's experimental and captivating production of Mozart's most ambitiously entrancing opera. Stunning animations, technical wizardry and brilliant stagecraft contribute to this unique production by the visionary director.

a world where nothing is what it seems: The story of The Magic Flute

Pursued by a serpent in a strange land between the sun and the moon, Prince Tamino soon finds himself at the centre of a wild adventure when he is saved by the mysterious handmaidens of the commanding Queen of the Night. Sent on a mission to save the Queen's captured daughter Pamina with a magic flute and bumbling servant Papageno, Prince Tamino's trials have just begun as he loses his heart to the Princess and comes to realise that the nature of good and evil in this odd place may not be as clear as they first appear.

Sung in English with English titles projected above the stage

Seen The Magic Flute? Loved it? Hated it?

Sound good to you? Share this page on social media and let your friends know about The Magic Flute at London Coliseum.