Sorry, it looks like The Marriage of Figaro is no longer happening on these dates 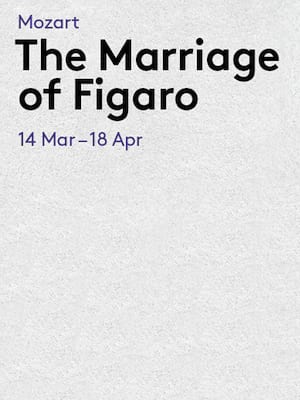 The Marriage of Figaro

Why See The Marriage of Figaro?

English National Opera will once again present The Marriage Of Figaro, but this time its an all new production from the mind of up and coming British theatermaker Joe Hill-Gibbins.  Mozart's most enduring comic opera will star British bass-baritone Bozidar Smiljanic as Figaro, British soprano Louise Alder as his resourceful lover Susanna, Sophie Bevan as the melancholy Countess, and bass-baritone Jonathan McCullough as the unfaithful Count, who has his roving eye firmly fixed upon Susannah. Conducted by German maestro Kevin John Edusei, this quirky take on Figaro is a delightful exploration of human desire and fallibility!

Set over the course of one madcap day, we join the characters of Figaro, Rosina and Count Almivira from The Barber of Seville, and the servants that have to outwit their increasingly outrageous behaviour. Figaro and Susanna are at last to be married; however they haven't counted on the arrival of several nefarious characters, including the Count, Marcellina and Dr Bartolo, each determined to break up the happy couple and have them for themselves. However, even more trouble arrives in the shape of the handsome teenager Cherubino, who is also determined to have Susanna - but he also declares his love to all the women in the house..!

Seen The Marriage of Figaro? Loved it? Hated it?

Sound good to you? Share this page on social media and let your friends know about The Marriage of Figaro at London Coliseum.