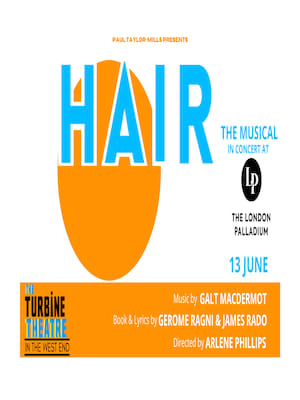 Hair In Concert Returns To The London Palladium!

Why See Hair in Concert?

Hair The Musical In Concert!

Following its record-breaking run at The Turbine Theatre, and a suspension due to current circumstances, Hair the Musical returns to the London Palladium to celebrate sixties counterculture in this specially produced version by Arlene Phillips. Hair the Musical in Concert will get your feet tapping and your hips swinging with its energetic beat, along with a cast of incredible talents including Luke Bayer (Everybody's Talking About Jamie), Jordan Luke Gage (Bat out of Hell), Jodie Steele (Heathers) and many more. Will the roof still be on the Palladium once it's finished? There's only one way to find out.

What is hair about?

Set in 1967, Hair is the story of a rag tag group of hippy kids known as The Tribe who haunt the East Village of New York City. In the face of growing unrest both at home and abroad, it is a peon to the age, where young people began to speak out for freedom and liberation, protesting the Vietnam War in a flash of song and colour whilst learning more about themselves in a wild and sexually liberated society. With a score including 'Let The Sunshine In', 'Aquarius' and of course, 'Hair' it's a joyous romp with a irresistible message of acceptance

Sound good to you? Share this page on social media and let your friends know about Hair in Concert at London Palladium.