Sorry! You missed Eugenius! at The Other Palace 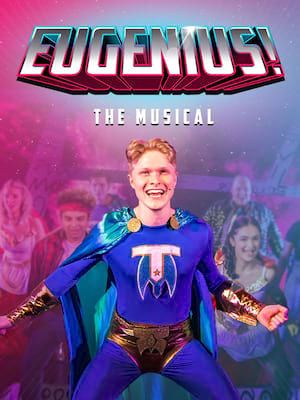 After a stellar run back in February, Ben Adams and Chris Wilkins' cooky coming-of-age musical returns to The Other Palace this September for another month-long run. Set against the backdrop of comic books and superheroes Eugenius! is a teenage love story like no other!

With Ian Talbot and Warwick Davis returning to direct and produce the production, Aaron Renfree is set to choreograph, with Gareth Owen and Andrew Ellis providing sound and lighting design.

What is Eugenius! about?

Eugene, a teenage boy has the dream to create his own comic book movie gaining inspiration from his nightly dreams of a distant world where heroes and villains battle it out for ultimate justice.

Joined on his journey by 'Janey' and 'Feris' Eugene but also dive into a personal quest. This comic writing genius must discover the true meaning of growing up, his inner superhero as well as saving the world from real life villains (and maybe some from distant galaxies). However, one thing Eugene can't predict is one of life's biggest turning points, falling in love.

Images taken from the original production

If you love comic books or even if you don't GO SEE EUGENIUS!

A brand new musical has landed from outer space and it's ready to take over planet earth! Ben Adams and Chris Wilkin's kooky coming of age comic book musical is lighting up The Other Palace for another month-long stint after its sell-out success earlier

Seen Eugenius!? Loved it? Hated it?

Sound good to you? Share this page on social media and let your friends know about Eugenius! at The Other Palace.