Sorry! You missed An Act of God at The Vaults 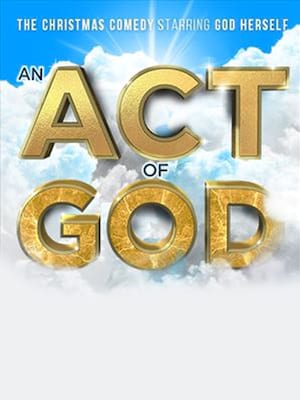 An Act of God

A gut-busting-funny riff on the never-ending folly of mankind.

Why See An Act of God?

a conversation with the big (wo)man

The Almighty bestows her divine presence on stage at The Vaults this Christmas, offering you a chance to discover the motives behind her mysterious ways in this glorious comedy by David Javerbaum. Originally a series of tweets, the former Daily Show writer soon turned his musings on her upstairs into a bestselling book and finally this hilarious 90-minute play. Raucous, offensive and most certainly the most blasphemous show since Book of Mormon, Zoe Lyons stars as Her, offering up an irreverent look at the big (wo)man you never knew you needed!

First staged in New York in 2015 with The Big Bang Theory's Jim Parsons, the production went on to play across the States with stars such as Kathleen Turner and Will and Grace's Sean Hayes adding their spin.

Javerbaum, an accomplished comedy writer, musical theatre librettist and lyricist, has an astounding 13 Emmys and two Grammys under his belt for his longstanding work for Comedy Central's The Daily Show. His take on the modern relationship between God and man, billed as a message from the Almighty as transcribed by himself, is an hour and a half of pure audacity; an attempt at the personification of a supreme deity with side splitting results. How else could one describe the musings of a God who keeps up with the latest season of American Idol?

One hour and a half with no interval

This show was the most boring thing I’ve ever seen. If it wasn’t for... more

Sound good to you? Share this page on social media and let your friends know about An Act of God at The Vaults.