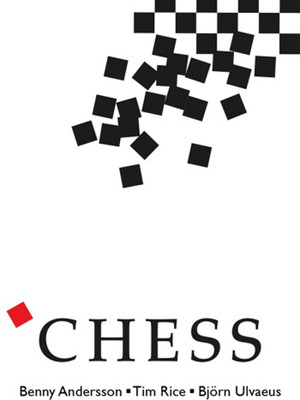 Images are from the 2018 production

...the show has returned to London's West End and in triumphant form thanks to a powerhouse cast, reborn original score and spectacular set design.

Chess the musical is returning to the west end!

Chess, the 1980s rock opera which shook the world is back on the West End! The 50-piece London Musical Theatre Orchestra will be presenting Chess at the Theatre Royal Drury Lane. Set during the Cold War, America's and Russia's relationship is heavily strained, with political tension at an all-time high two chess rivals go head-to-head, but this match is more than just a game of chess.

What is Chess about?

At the heart of the story are Freddie Trumper (the ostentatious American), Anatoly Sergievsky (the passionate Russian) and Florence Vassy (Freddie's strong-willed and long suffering second). Freddie and Anatoly are set to compete in the Wold Chess Championships, a match that holds a great deal of political tension for not only US and USSR relations but world politics as a whole. This rock-opera is certainly complex as the three pawns become entangled in a love-triangle that jeopardises the tournament.

As the story moves around the world the players, lovers, politicians and spies are manipulated to the beat of an impressive rock score. ABBAs Bjorn Ulvaeus and Benny Andersson are the creative genius' behind this vast and extravagant score, having teamed up with world-renowned lyricist, Tim Rice the music is certainly at the centre of the show. Audiences will become immersed in the story as they sing along to well known hits such as "I Know Him So Well" and "One Night In Bangkok".

The song "One Night in Bangkok" was such a hit that it was released as its own single and is still heavily featured on playlists on rock music stations.

Sometimes you want a flashy, over the top and an all out thrill ride and THAT is exactly what Chess is.

Full of technical wizardry and a set that would leave even the biggest West End musicals jealous, Chess bursts into the ENO's London Coliseum with the grandness that is deserves. Instantly wowed by the opening sequence I settled into my seat and got read

Seen Chess? Loved it? Hated it?

Sound good to you? Share this page on social media and let your friends know about Chess at Theatre Royal Drury Lane.