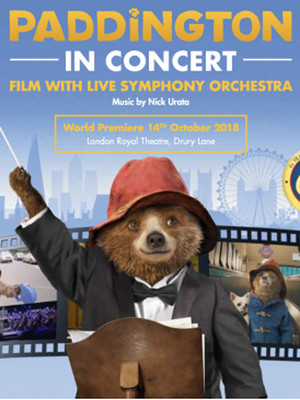 Why See Paddington in Concert?

Celebrate 60 years of Paddington Bear in this extra special concert at the Theatre Royal Dury Lane! Witness the infamous bear and all his friends as you've never seen them before as the ground-breaking film is shown on the big screen, accompanied by the Novello Orchestra.

Conducted by George Jackson, be enchanted with the magic of Paddington all over again as Nick Urata's infamous score (that accompanies all Paddington's greatest adventures) is played live with over 60 musicians. But that's not all, a couple of special guests will also be in attendance, Nick Urata and Paddington himself!

Sound good to you? Share this page on social media and let your friends know about Paddington in Concert at Theatre Royal Drury Lane.