Sorry! You missed Breakfast at Tiffany's at Theatre Royal Haymarket 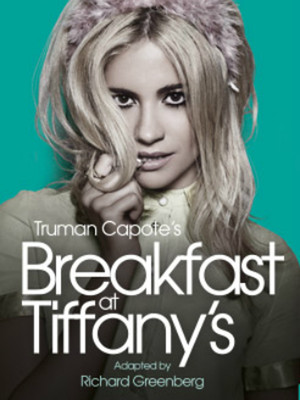 Why See Breakfast at Tiffany's?

THE ICONIC PLAY RETURNS TO LONDON FOR 2016

Pixie Lott takes on Truman Capote's iconic Holly Golightly in this brand-new revival of the hit play. Last seen on Broadway in 2011, the production finally returns to London after 2009's production starring Anna Friel. This time it makes its way to London's Theatre Royal Haymarket for a limited 12-week engagement in 2016. The West End run will follow a tour around the UK and Ireland in the spring and summer.

WHAT IS IT ABOUT?

Based on Truman Capote's beloved novella, Breakfast at Tiffany's takes place in New York in 1943. We follow the handsome but impoverished writer Fred (Downton Abbey's Matt Barber), newly arrived from Louisiana as he meets his neighbour, the scatty, beautiful and captivating escort Holly Golightly. She can't help it; everyone falls in love with her, - including Fred. But as Fred is poor and himself taking money from an older lady in return for his attentions, he finds himself facing up against Holly's other suitors; a playboy millionaire and the future president of Brazil. But nothing in Holly's life is as it seems, and with war raging on in Europe, a telegram bearing tragic news threatens to derail her new life, and expose her humble background.

to be confirmed by producers

Adapted for the stage by Richard Greenberg

There are few people that could cast as large a shadow as Audrey Hepburn in her prime, especially in her role as the original girl-about-town in the vintage classic Breakfast at Tiffany's.

Seen Breakfast at Tiffany's? Loved it? Hated it?

Sound good to you? Share this page on social media and let your friends know about Breakfast at Tiffany's at Theatre Royal Haymarket.