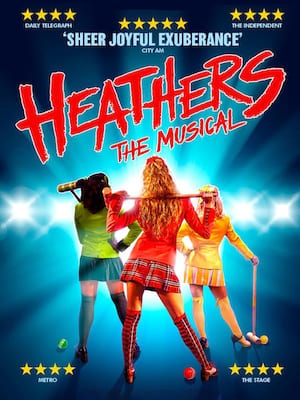 The show is packed with talent performed with huge zest

Why See Heathers The Musical?

She's my best friend. God I hate her

Heathers the Musical returns to Theatre Royal Haymarket for a strictly 12-week run. Following two smash-hit London seasons and the WhatsOnStage Award for Best New Musical, Heathers the Musical is back! Led by Christina Bennington (Bat Out of Hell) as Veronica and Jordan Luke Gage as her havoc-loving boyfriend JD, this run also welcomes back Jodi Steele as head Heather, Heather Chandler; a role she was born for!

What's your damage? The story of Heathers

Greetings and salutations. Welcome to Westerberg High where Veronica Sawyer is just another nobody dreaming of a better day. But when she joins the beautiful and impossibly cruel Heathers and her dreams of popularity may finally come true, mysterious teen rebel JD teacher her that it might kill to be a nobody, but it is murder being a somebody...

Wickedly funny and with dazzling book, music and lyrics by Kevin Murphy and Laurence O'Keefe, Heathers the Musical is based on the 1988 cult hit, that starred Winona Ryder and Christian Slater, and produced by Bill Kenwright and Paul Taylor-Mills. With direction from Andy Fickman and electrifying choreography by Gary Lloyd, this is one class production you can't afford to skip.

Please note, images are from a previous run of Heathers

I can not praise the cast enough, each of them equally as talented as the other.

Dear Diary, whether to kill yourself or not is one of the most important decisions a teenager can make, the next one is whether to go to Heathers The Musical on the West End - and if you want the short answer, I say yes!

Seen Heathers The Musical? Loved it? Hated it?

Sound good to you? Share this page on social media and let your friends know about Heathers The Musical at Theatre Royal Haymarket.