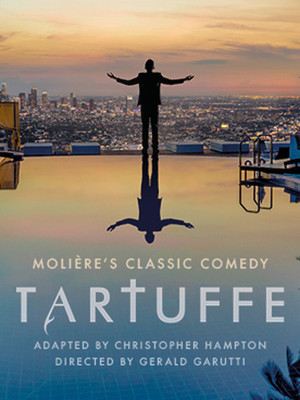 Good God! Do you expect me to submit To the tyranny of that carping hypocrite? Must we forgo all joys and satisfactions Because that bigot censures all our actions?

Dig out your French to English dictionaries as Moliere's 17th Century comedic classic returns to the stage in an updated adaptation from Christopher Hampton, with direction from Gerald Garutti, in a dual language production with surtitles provided throughout- A West End first!

Moving the setting from Paris to Hollywood, the titular imposter Tartuffe (Peaky Blinders' Paul Anderson) is now an American Evangelist, set on conning a newly arrived (and very wealthy) family with his false piety. While Orgon, the head of the household attempts to set himself up as a media tycoon, Tartuffe ingratiates himself with his wife and daughter with his fraudulent talents, seduction and good old-fashioned manipulation, in his attempt to get his hands on a fortune.

First performed in 1664, Tarfuffe has proven to be Moliere's masterpiece with myriad revivals around the world each year. A fact that might have surprised the first critic of the show, King Louis XIV, who was so scandalised, he had the show banned after the first night.

In English and French with surtitles

Seen Tartuffe? Loved it? Hated it?

Sound good to you? Share this page on social media and let your friends know about Tartuffe at Theatre Royal Haymarket.