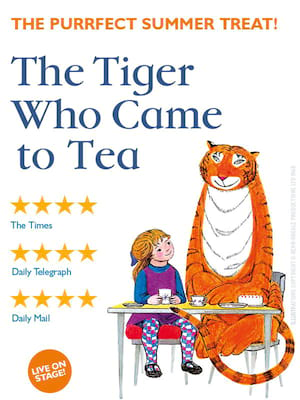 The Tiger Who Came To Tea

Why See The Tiger Who Came To Tea?

Celebrating over 50 years of tea-time!

Based on the award-winning picture book by Judith Kerr, this delightful family show is packed with fun for cubs everywhere and their respective grown-ups. The Tiger Who Came to Tea is one of the best-selling picture books of all time; since its publication way back in 1968, it has sold over four million copies worldwide and has been translated into over 20 different languages.

WHAT IS IT ABOUT?

This magical adaptation penned by the leading children's theatre David Wood OBE sees a normal family tea-time interrupted by a very large and stripey guest. As the Tiger ingratiates himself into the household, chaos and clumsy shenanigans ensue, as the family race to keep their peculiar guest occupied and fed. Expect magic, sing-along songs for your cubs to join in with, and of course, plenty of slapstick comedy to keep them (and you) rrrrroaring with delight!

The show is the ideal introduction to theatre for pre and primary school children and their families. Featuring magic and sing-along songs, The Tiger Who Came to Tea is perfect for developing literacy and listening skills, and audience participation is highly encouraged!

55 minutes with no interval

Kaymac: “Great adaptation for all the family ”

Had a wonderful time seeing his performance this morning. Took 5 children... more

We took a four- and six-year-old to this show first thing today and we... more

Sound good to you? Share this page on social media and let your friends know about The Tiger Who Came To Tea at Theatre Royal Haymarket.