Sorry! You missed Black Is The Color Of My Voice at Trafalgar Studios 2 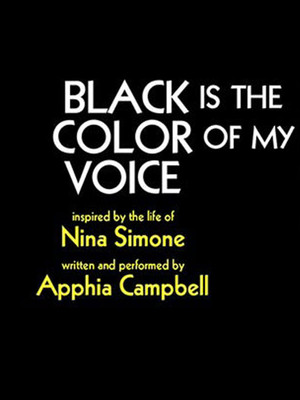 Black Is The Color Of My Voice

Apphia Campbell is nothing short of sensational... she will make you cheer for her, smile with her and then sting your eyes with tears

Why See Black Is The Color Of My Voice?

A Tribute To The One & Only Nina Simone

Fringe First Award-winning playwright and performer Apphia Campbell brings her tour de force one-woman show about the life of venerated jazz singer and civil rights activist Nina Simone to London's Trafalgar Square Studios for a strictly limited four week run in early 2019. What began as a stripped back show in 2013 has since grown to include critically acclaimed runs in Shanghai, Brighton, New York and a 2017 stint at the Brasserie Zedel, marking its return to the capital city with a fully realised production that fuses the whirlwind of Simone's incredible story with the passion of her music.

A charismatic performer with the same sense of magnetism as the show's subject, Campbell invites the audience into the intimate climes of a hotel room where Simone has shut herself away to commune with her dead father, whilst attempting to kick alcohol and tobacco. Her vivid recollections of her time as a child prodigy from a strict, religious family, and her rejection from classical music college due to the color of her skin bubble to the surface, whilst memories of early successes as a jazz pianist pioneer and flash points of her activism seamlessly interweave with breathtaking performances of iconic Simone songs like 'I Loves You, Porgy', 'I Put A Spell On You' and 'Feeling Good'.

On weekend evenings of the Trafalgar Square Studios run, Campbell will also perform Soul Sessions, a 50 minute cabaret set inspired by Simone's music which is set to run after the main show.

Seen Black Is The Color Of My Voice? Loved it? Hated it?

Sound good to you? Share this page on social media and let your friends know about Black Is The Color Of My Voice at Trafalgar Studios 2.