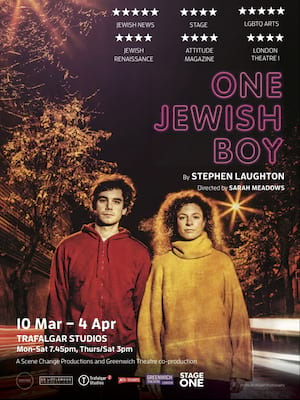 One Jewish Boy is a necessary if flawed play, exploring the impact of inherited and lived trauma with great wit and creative direction.

Why See One Jewish Boy?

Playing at the Old Red Lion in December 2018 and January 2019 to much critical acclaim, Stephen Laughton's deeply moving hit enjoys a West End transfer to Trafalgar Square Studios this spring. Running for three and a half weeks, the insightful two-hander has received much praise for its tender and nuanced take on London's rising antisemitism, as well as its tackling of big themes in an intimate and relatable domestic setting.

Robert Neumark-Jones stars as Jessie, a "nice Jewish boy from London' whose relationship with Peckham lass Alex (Asha Reid) is chronicled over the course of 15 years. The bittersweet comedy explores their shared struggle against fear and prejudice, as they come to terms with their own identities. It poignantly asks if the fear of hatred is worse than hate itself, with stunning, thought-provoking results.

Sound good to you? Share this page on social media and let your friends know about One Jewish Boy at Trafalgar Studios 2.