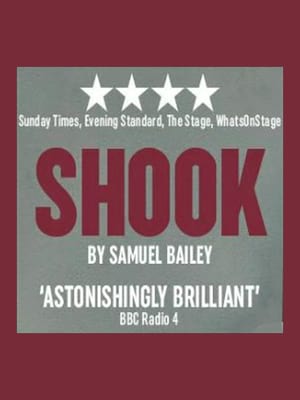 Bailey's remarkably accomplished debut [is an] excellent production [with] a fantastic cast...there's a palpable sense that he's a major talent to be reckoned with.

The 2019 winner of the prestigious Papatango New Writing Prize, up and coming theatremaker Sam Bailey's Shook received much critical acclaim during its run at the Southwark Theatre the same year. The poignant drama enjoys a West End transfer this spring, bringing its poignant portrait of young offenders and fatherhood to Trafalgar Studios to the stage under the direction of Papatango artistic director George Turvey.

A profound exploration of empathy, Shook asks exactly who deserves the viewer's compassion throughout the story of three incarcerated youths Cain, Riyad and Jonjo. Bailey's sharp-witted dialogue finds the young men attending parenting classes in the hope that they'll be good fathers on the outside, but their entertaining, hyper-masculine wise-cracking does little to hide the existential angst beneath, whilst heartfelt confessions about their own childhood neglect provoke thoughts about the political nature of juvenile detention.

Seen Shook? Loved it? Hated it?

Sound good to you? Share this page on social media and let your friends know about Shook at Trafalgar Studios 2.