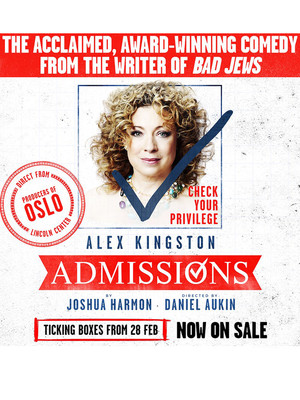 Hot off the back of a hit off-Broadway run, Joshua Harmon's Admissions heads to London's Trafalgar Studios this spring. Garnering a Drama Desk nomination for Outstanding Play last year, Admissions' London run is set to star Doctor Who actor Alex Kingston as it dives into the hypocrisies of liberal, moneyed America.

Sherri Rosen-Mason, a local prep school's admissions officer, and her husband, the school's headmaster, are on a mission to make their school as diverse as possible. However, when a chance for their own son to be admitted into an Ivy league university arises, their progressive values begin to crumble. Regular Harmon collaborator Daniel Aukin directs.

Sound good to you? Share this page on social media and let your friends know about Admissions at Trafalgar Studios 1.