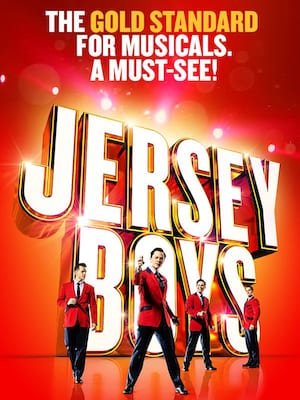 the smash-hit returns to the west end!

The story of Frankie Valli and The Four Seasons is back where it belongs in the West End! Winning an Olivier Award for Best New Musical in 2009 and 55 more across the globe, this musical phenomenon breaks box office records wherever it plays, telling the story of four young lads from New Jersey, and the incredible story of their rise to the top of the charts.

The story of how four blue-collar boys from the back streets of New Jersey became America's biggest pop sensation, Jersey Boys premiered on Broadway in 2005 and promptly won the Tony Award for Best Musical the following year. The quality of the storytelling (not something readily associated with jukebox musicals) should have come as no surprise given that Marshall Brickman and Rob Elice were on writing duties. Brickman is an Oscar-winning screenwriter, best known for co-writing Annie Hall and Manhattan with Woody Allen, while Elice has the phenomenally acclaimed play Peter and The Starcatcher to his name. Both were enlisted by Clint Eastwood to write the screenplay for the Jersey Boys movie.

Pulsing with the vibrant energy of the 50s and 60s, Jersey Boys trounces its contemporaries by fashioning a truly compelling and complex narrative from The Four Seasons rags to riches tale. And of course, there's just the small matter of the songs as well: Sherry, Walk Like a Man, December, 1963 (Oh What A Night), Can't Take My Eyes Off You and Big Girls Don't Cry are all included.

Unlike most other jukebox musicals, Jersey Boys doesn't shoe-horn the group's songs into an invented narrative. Rather, it's a chronological retelling of the band's rise to fame, narrated by each of the four members in turn.

We begin in the late 50s, with our narrator New Jersey singer, and sometime petty criminal, Tommy Devito. He's currently playing alongside his brother Nicki and friend Nick Massi in a rock 'n' roll band named the Variety Trio. It's fair to say that they aren't having the greatest of successes. But that all changes when Devito discovers the singing talents of local boy Frankie Castelluccio (later Valli). In his high-pitched, angelic voice, Devito knows he has something special. When genius songwriter Bob Gaudio is added to the mix, the group go from playing pokey bars to topping the charts. Their new name? The Four Seasons. Not everything is rosy at the top though, with the band's troubled New Jersey past coming back to haunt them just they hit the big time...

May be inappropriate for 12 and under

Two hours and 40 minutes with one interval

If you've seen it before, I recommend seeing it again to see how the new cast and theatre, and newcomers will delight in the sheer toe-tapping fabulousity of the numbers.

Even if you weren't a twinkle in your parents' eyes in the Sixties, Jersey Boys has plenty of catchy non-stop hits that you are bound to recognise.

Cheryl: “What a night”

Just saw Jersey Boys in London and have to say that the cast were fantastic!... more

a brilliant girls night out , the voices and choreography were suberb and... more

Sound good to you? Share this page on social media and let your friends know about Jersey Boys at Trafalgar Theatre.