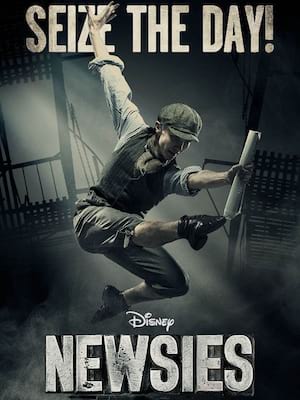 Read all about it!

Disney's Tony-winning Newsies will finally make its UK premiere this winter! Written by Broadway icon Harvey Feirstein, the score comes from the legendary Alan Menken, with lyrics by Jack Feldman, Newsies is an uplifting and exhilarating tale that follows a group of newsboys at the turn of the 19th century. This brand new production will be staged in the round at the Troubadour Wembley Park Theatre, with direction and choreography from Matt Cole.

Telling the true story of the real-life Newsboy strike of 1899, the musical originally premiered on Broadway in 2012, capturing the public's imagination for 1,005 performances and winning two highly coveted Tony Awards, including Best Score. Full of heart-soaring song and dance numbers, the tale of these plucky boys and girls is one the whole family will enjoy.

Set in New York at the turn of the century, the song and dance spectacular chronicles the 1899 Newsboys' Strike. Lead by the charismatic teenager Jack Kelly, a gang of young paperboys takes on the man when publishing industry fat cats Joseph Pulitzer and William Hearts raise distribution prices at the cost of their already measly wages. Rallying the local youths to stand up for themselves, Kelly finds romance and a cause worth fighting for amidst classic songs like 'Brooklyn's Here' and 'Something To Believe In'.

Sound good to you? Share this page on social media and let your friends know about Newsies at Troubadour Wembley.