Sorry! You missed The Curious Incident of the Dog in the Night-Time at Troubadour Wembley 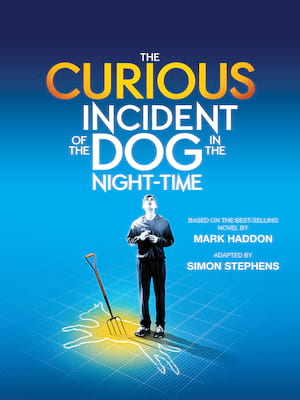 The Curious Incident of the Dog in the Night-Time

A beautiful, eloquent, dazzlingly inventive show about the wonders of life.

Why See The Curious Incident of the Dog in the Night-Time?

"My name is Christopher John Francis Boone. I know all the countries of the world and the capital cities. And every prime number up to 7507."

The seven-time Olivier and five-time Tony-winning smash hit returns to London for a limited time this Winter! Wowing audiences since 2013 the hit play is based on the award-winning book by Mark Haddon, telling the story of a 15-year-old maths genius with Asperger's Syndrome, and the amazing journey he sets out on in order to solve the mysterious death of his neighbour's dog.

This cleverly staged production has been hailed for its beautiful portrayal of life lived by children like Christopher and their unique perspective on the world. It will make you think, laugh and, most of all, look at the world around you in a whole new way.

What is Curious Incident about?

Young Christopher Boone lives in a world where ordinary social interactions can be overwhelming but complex mathematics and patterns naturally jump out at him - a combination which is very well suited to being a solitary detective. His father has banned him from undertaking anymore cases, however, when he comes across an unmissable mystery at exactly seven minutes past midnight Christopher is unable to resist solving the crime.

Mark Haddon won over 17 international literary awards for his 2003 novel!

Suitable for audiences aged 13 and upwards

Two hours and 40 minutes including one interval

The 2014 Broadway transfer won the following Tony Awards in 2015

Seen The Curious Incident of the Dog in the Night-Time? Loved it? Hated it?

Sound good to you? Share this page on social media and let your friends know about The Curious Incident of the Dog in the Night-Time at Troubadour Wembley.