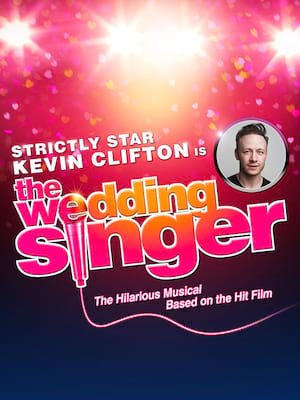 Join the party of the year!

Why See The Wedding Singer?

Strictly Come Dancing's Kevin Clifton takes us back to the heady 1980s in this delightful musical adaptation of Adam Sandler's 1998 film, featuring towering bouffants and shoulder pads a-plenty. No stranger to taking a turn on the stage, the Strictly professional has become a firm show favourite in recent years, with roles in Dirty Dancing and Rock of Ages giving him the chance to display his musical chops. Don't miss him as he steps into the leading role of Robbie Hart, the eponymous Wedding Singer.

Taking us back to a time before C.D players and iPhones, The Wedding Singer takes us into the world of Robbie Hart, a wedding singer with rock-star ambitions whose joy in his work is doubled by his own impending nuptials. But even though he may be New Jersey's choice of wedding entertainment, his own road to the altar is not so smooth. Enter Julia, a delightful waitress who might just help Robbie rediscover his purpose and his heart!

Debuting on Broadway in 2006, it's a hilarious and touching adaptation from Ched Beguelin, Tim Herlihy and Matthew Sklav (the team behind Elf the Musical) that tells Robbie's story anew with fabulous new songs, dance numbers, romance and plenty of totally radical 80s references.

Two hours and 25 minutes including interval

Seen The Wedding Singer? Loved it? Hated it?

Sound good to you? Share this page on social media and let your friends know about The Wedding Singer at Troubadour Wembley.