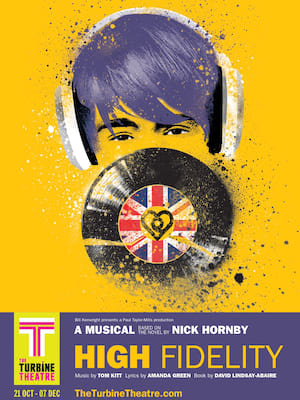 Nick Hornby's classic cult novel High Fidelity makes its London debut at the Turbine Theatre as a fully-fledged musical this October! After a successful run in Boston in 2006, the musical adaptation flies back to its native London featuring a book by Pultizer Prize-winner David Lindsay-Abaire and music by another Pulitzer Prize-winner, Tom Kitt (Next To Normal).

Inspiring a film of the same name (which starred Jack Black and John Cusack) High Fidelity follows record-store owner Rob, whose success in business doesn't quite match his success in love. Set against the backdrop of stacks of records Rob sets out to find out why his relationships don't stick, with surprising consequences. With a quintessentially British setting High Fidelity is a charming and heartwarming tale of love and self-discovery.

Nick Hornby's novels are so popular that film producers can't keep their hands off them! As well as High Fidelity Hornby's novels About A Boy and Juliet, Naked have inspired hit movies which have starred the likes of Hugh Grant, Ethan Hawke, Rose Byrn, and Nicholas Hoult!

a funny slice of nostalgia

Sound good to you? Share this page on social media and let your friends know about High Fidelity at Turbine Theatre.