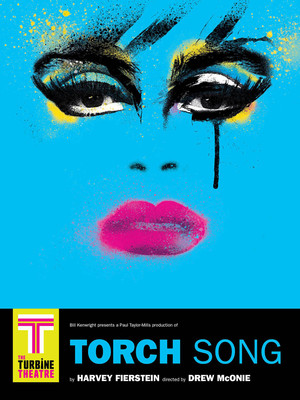 The brand new Turbine Theatre celebrates its inaugural season with a revival of Harvey Fierstein's Tony-winning play, Torch Song. Following the story of Arnold Beckoff, a drag queen on a quest for love in 1970s New York, Torch Song is a touching portrayal of love, loss, sexual identity and the longing for family approval. This 2019 production will be directed by Olivier Award-winner Drew McOnie.

Debuting on Broadway in 1982 Torch Song won two Tony Awards, one for Best Play and one for Best Actor In A Play for the original star, and playwright, Harvey Fierstein! The play recently enjoyed a critically acclaimed Broadway revival in 2018, where Arnold Beckoff was played by stage and TV favourite Michael Urie. This 2019 production will be the third time that Torch Song has played in London, after making its West End debut in 1985 at the Albery Theatre (now the Noel Coward Theatre) where it starred Anthony Sher and Rupert Graves!

Groundbreaking, heartbreaking and uplifting, Torch Song is the perfect production to open the newly built Turbine Theatre at Battersea Power Station. Set to be one of the most celebrated production in the summer season, don't miss your chance to see this iconic play in the heart of London!

Sound good to you? Share this page on social media and let your friends know about Torch Song at Turbine Theatre.