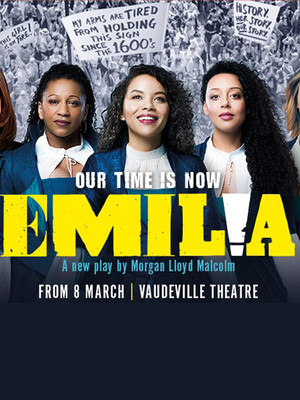 Ambition, intensity and rebellion in this heartfelt call to arms

Men, who forgetting they were born of women, nourished of women, and if they were not of the means of women, they would be quite extinguished out of the world, and a final end of them all.

After some four hundred years as at best, a muse and at worst, a footnote, the supposed 'Dark Lady' of Shakespeare's Sonnets steps out from the pages of literature and into the spotlight in this specially commissioned play by Morgan Lloyd Malcolm. Focussing on the real woman behind the words, the titular Emilia Basson, this sell-out show transfers from the Globe to the West End to bring her story to new audiences this spring.

First seen during the historic venue's 2018 Summer Season, Emilia digs deeper into the story of this remarkable woman, who was not only a real person but one of the first women in England to publish and profit from her own poetry in addition to being a teacher and a mother.

Beyond the Sonnets, Emilia is believed to be woven throughout a number of Shakespeare's plays, including Othello, The Two Noble Kinsmen and Love's Labour's Lost. But who was she? In some cases, we know lots about her life through her letters and works, but in others Lloyd Malcolm has created a new narrative, letting us make up our minds about her away from the male gaze.

Images are taken from the Globe's 2018 production

Seen Emilia? Loved it? Hated it?

Sound good to you? Share this page on social media and let your friends know about Emilia at Vaudeville Theatre.