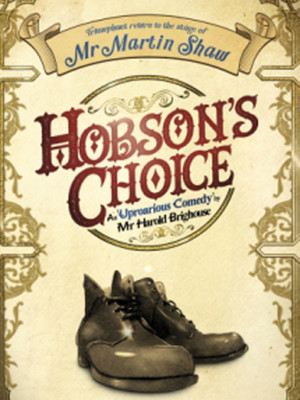 "This sly portrait of a cobbler and his class-conscious daughters is shown to be way ahead of its time in Jonathan Church's handsome staging."

Martin Shaw returns to the West End as one of the greatest characters in English drama, the boisterous, cantankerous Henry Horatio Hobson. First seen at the Theatre Royal Bath, this delicious new production will mark the 100th anniversary of Harold Brighthouse's play about the self-made man who's own pride knows no bounds, even if it costs him his livelihood, and the love of his family.

What is Hobson's Choice about?

Lancashire businessman Henry Horatio Hobson has life sorted - he runs a fairly successful bootmaking business and has three daughters, two of whom he intends to marry off, keeping the 'plainer' of the three as his carer. What he doesn't count on, of course, is this 'plainer' daughter having a mind of her own and not finding his desires for her future very appealing at all! Maggie, the daughter in question, is lucky to have inherited the lion's share of her family's determination and has a plan in mind to redirect her future in a much more desirable direction.

She announces that she is to marry none other than one of her father's employees, the long-suffering tradesman Willie Mossop. Henry disapproves of this union for any and all reasons - class and career being the cherries on top - but is even more horrified to hear that the newly wed duo have now setup a rival bootmaking company! His stubbornness and surly nature seem to have been the undoing of all he has planned - is it too late to change?

Two hours and ten minutes including one intermission

Sound good to you? Share this page on social media and let your friends know about Hobson's Choice at Vaudeville Theatre.