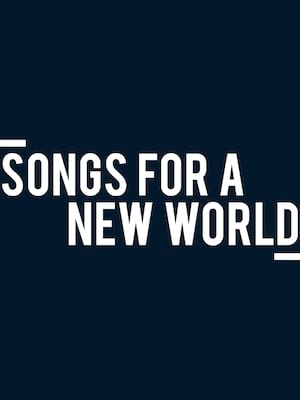 Songs For A New World

Songs For A New World returns in Winter 2021

Why See Songs For A New World?

The Return of a masterpiece

In 1995, three-time Tony winner, Jason Robert Brown wrote his first musical, creating the iconic sound of Songs For A New World. Following its hit digital production at the Other Palace in July 2020 and two sold out runs at the London Palladium in October 2020, Songs For A New World is making its West End return in Winter 2021 for a strictly limited five week run at London's Vaudeville Theatre. Featuring Hamilton's Rachel John, Waitress' David Hunter and many more of London's major theatre stars making this an experience like no other.

What is songs for a new world about?

Songs For A New World is a compelling mixture of musical and theatrical songs. You'll be transported through a stellar collection of toe-tapping and moving numbers which will stick with you long after you leave the theatre. Whilst on your journey through this compilation, you'll meet a number of characters, all of which will represent a collective of our hopes and dreams for a new world.

Tickets are expected to sell out fast, so be sure to secure your sport for this rare experience.

Sound good to you? Share this page on social media and let your friends know about Songs For A New World at Vaudeville Theatre.