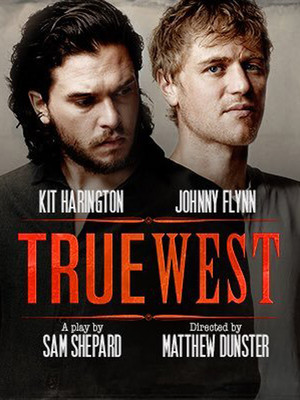 Oh brother, where art thou?

Kit Harington is a well known face after his starring role in the juggernaut television series, Game Of Thrones, but that's not all that he's done. Before heading off to Westeros, Harington was a regular on the theatrical scene having appeared in Posh, and War Horse. Singer-songwriter/actor Flynn's previous theatre credits include the 2010 Globe production of Richard III and Martin McDonagh's Hangmen, both of which later transferred to Broadway. More recently, he was seen as Captain Dobbin in ITV's Vanity Fair.

What is True West about?

Lee and Austin have never seen eye to eye. Austin, the ambitious screen writer has always seen his brother Lee, as a unsuccessful drifter. Whilst housesitting their Mother's Californian home, they begin to battle each other on issues big and small. But when Lee railroads Austin's latest project and scares off his producer, the feud escalates to all out war, pitting each against each other in a role-reversal that could change their lives for ever.

Sound good to you? Share this page on social media and let your friends know about True West at Vaudeville Theatre.