Sorry! You missed Godspell at Virtual Experiences for London

From your city, London to anywhere in the world! 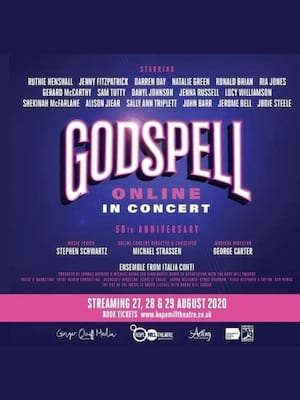 For a musical based on the Gospel according to St. Matthew, "Godspell" is strangely irreverent, wacky, and endearing.

Over a dozen of the West End's leading luminaries are set to light up screens across the world during a special online concert celebrating the 50th anniversary of bonafide musical theater classic Godspell. Available to stream from 27 to 29 August, the virtual show features the talents of Godspell alumni Ruthie Henshall and Darren Day, as well as Six's Shekinah McFarlane and Dear Evan Hansen's Sam Tutty amongst others. Together they'll be raising funds for three worthy causes - the Hope Mill Theater, the National AIDS Trust and Acting For Others.

First performed Off-Broadway in 1971, Godspell heralded the arrival of powerhouse composer Stephen Schwartz (Wicked, Pippin). The first musical of his cherished repertoire, it features iconic rock and roll numbers like Day By Day and By My Side and follows a small group of people who help Jesus tell his parables by making use of music, storytelling, games and comedy.

Seen Godspell? Loved it? Hated it?

Sound good to you? Share this page on social media and let your friends know about Godspell at Virtual Experiences for London.