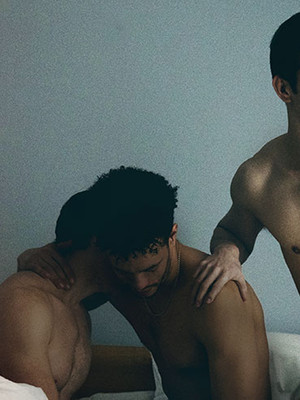 The Climax is just the beginning

A runaway success Off-Broadway, S. Asher Gelman's exploration of a modern gay marriage finally made its London debut this summer at the Southwark Playhouse. Now heading to the Waterloo East Theatre for the autumn, Afterglow is directed by Tom O'Brien and is a sex-positive and vivid look at intimacy and polyamory and how we navigate our own personal boundaries.

Following Josh and Alex, affluent New York City husbands with a baby on the way, Gelman highlights the blurred lines between love and loyalty that arise when they open their bed up to include a third. Noted for its casual nudity and explicit sex scenes, Afterglow is more absorbing than titillating as we see a non-monogamous relationship rocked by an affair, leading to questions about connection, love, and the nature of commitment in an open relationship.

Seen Afterglow? Loved it? Hated it?

Sound good to you? Share this page on social media and let your friends know about Afterglow at Waterloo East Theatre.