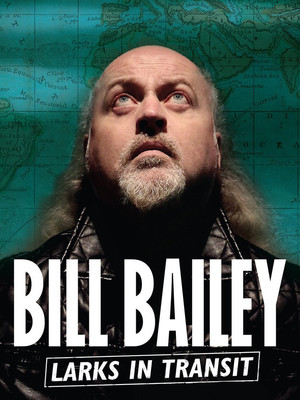 (Larks in Transit) scales the peaks of sublime silliness

Everyone's favourite flaxen-haired comedian returns to London this Christmas with a new residency at the Wyndham's Theatre as part of his newest world tour. Larks in Transit is a typical Baileysque adventure, covering his extensive experience of travelling as a stand-up with his typical surrealistic, musical and delightful approach to the world.

Recognised as one of Britain's most popular comedians, Bailey is also a classically trained musician, proficient in piano and guitar, often utilising these in his acts both on the comedy circuits and at festivals. Most famed for his role as the friendly Manny Bianco in Black Books opposite Dylan Moran's monstrous book seller, Bailey has also appeared in British films such as Hot Fuzz and more. When not touring, Bailey is a regular on various BBC comedy panel shows including his tenure as captain on Buzzcocks, and appears on Have I Got News for You and QI.

Seen Bill Bailey: Larks in Transit? Loved it? Hated it?

Sound good to you? Share this page on social media and let your friends know about Bill Bailey: Larks in Transit at Wyndhams Theatre.