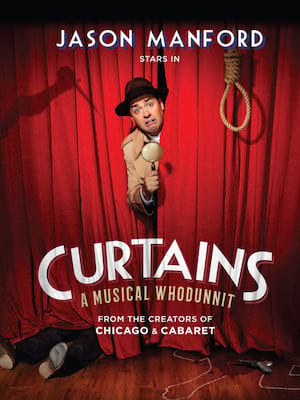 After a perfectly murderous UK tour, Rupert Holmes' musical whodunnit transfers to London in December! With music and lyrics by musical theatre legends, Kander and Ebb (Cabaret, Chicago) Curtains follows a troupe of Broadway actors who all come under the magnifying glass when their leading lady is found dead on opening night!

Starring comedy juggernaut Jason Manford as Detective Frank Cioffi this uproarious musical whodunnit is a smorgasbord of murder, mystery, and music that'll keep the audience on its tapping toes!

Having been a stalwart member of Britain's comedy circuit for over 15 years Jason Manford has become one of the country's most recognisable comics. Winning the Perrier Comedy Award in Edinburgh in 2005 Manford's straight to the point personality and personal routines have seen him become a regular on some of the UK's biggest panel shows, '8 out of 10 Cats' and 'Would I Lie To You', as well as presenting Sky Three's 'Premier League Allstars Extra Time.'

Seen Curtains? Loved it? Hated it?

Sound good to you? Share this page on social media and let your friends know about Curtains at Wyndhams Theatre.