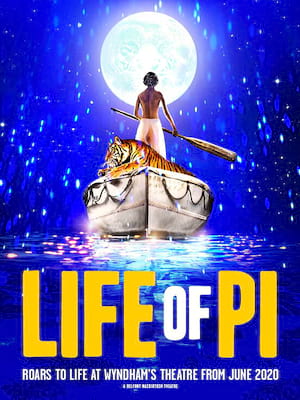 Why See Life of Pi?

Directed by Max Webster and with astonishing puppetry design from Finn Caldwell and Nick Barnes, the extraordinary events of one 16-year-old's fight for survival following a shipwreck are rendered in vibrant colour, music and visual wizardry in this consummate production.

As transformative as it is captivating, Martel's Life of Pi is a magical masterpiece that introduces us to Pi, a 16-year-old boy adrift in a lifeboat with four fellow survivors - a hyena, a zebra, an orangutan, and a terrifying Bengal Tiger. As they navigate the unpredictable waters of the Pacific Ocean, Pi's boundless imagination soon becomes his greatest asset.

Very much enjoyed the London production. Pi was excellent and the production... more

Sound good to you? Share this page on social media and let your friends know about Life of Pi at Wyndhams Theatre.